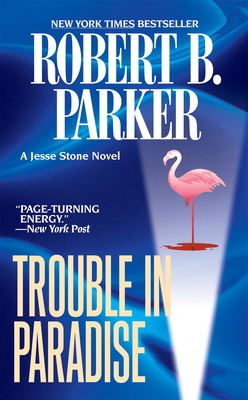 Jesse Stone returns in this New York Times bestselling novel of death and deception from Robert B. Parker.

Stiles Island is a wealthy and exclusive enclave separated by a bridge from the Massachusetts coast town of Paradise. James Macklin sees the Island as the ultimate investment opportunity: all he needs to do is invade it, blow the bridge, and loot the island. To realize his scheme, Macklin, along with his devoted girlfriend, Faye, assembles a crew of fellow ex-cons—all experts in their fields—including Wilson Cromartie, a fearsome Apache. James Macklin is a bad man, a very bad man. And Wilson Cromartie, known as Crow, is even worse.

As Macklin plans his crime, Paradise police chief Jesse Stone has his hands full. He faces romantic entanglements in triplicate: his ex-wife, Jenn, is in the Paradise jail for assault, he’s begun a new relationship with a Stiles Island realtor named Marcy Campbell, and he’s still sorting out his feelings for attorney Abby Taylor. When Macklin’s attack on Stiles Island is set in motion, both Marcy and Abby are put in jeopardy. As the casualties mount, it’s up to Jesse to keep both women from harm.

Robert B. Parker was the author of seventy books, including the legendary Spenser detective series, the novels featuring Police Chief Jesse Stone, and the acclaimed Virgil Cole–Everett Hitch westerns, as well as the Sunny Randall novels. Winner of the Mystery Writers of America Grand Master Award and long considered the undisputed dean of American crime fiction, he died in January 2010.

Praise for Trouble in Paradise

“Tough and tight...[Parker] once again shows how to do it well, and with style.”—Publishers Weekly

“Parker has injected Trouble in Paradise with yet another blast of the page-turning energy he’s famous for.”—New York Post

“The dialogue is great, the characters realistic, and the story top-notch.”—Kansas City Star

“[Parker] has another winner in Jesse Stone. The characters, good and bad, are well developed.”—USA Today

“Parker does an excellent job of building tension and weaving several subplots into an explosive finale.”—Cleveland Plain Dealer