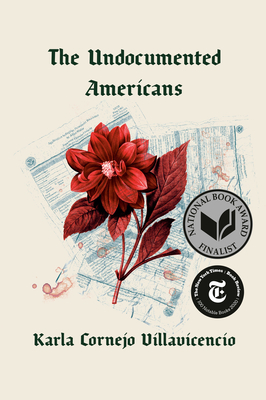 NATIONAL BOOK AWARD FINALIST • One of the first undocumented immigrants to graduate from Harvard reveals the hidden lives of her fellow undocumented Americans in this deeply personal and groundbreaking portrait of a nation.

“Karla’s book sheds light on people’s personal experiences and allows their stories to be told and their voices to be heard.”—Selena Gomez

Writer Karla Cornejo Villavicencio was on DACA when she decided to write about being undocumented for the first time using her own name. It was right after the election of 2016, the day she realized the story she’d tried to steer clear of was the only one she wanted to tell.  So she wrote her immigration lawyer’s phone number on her hand in Sharpie and embarked on a trip across the country to tell the stories of her fellow undocumented immigrants—and to find the hidden key to her own.

Looking beyond the flashpoints of the border or the activism of the DREAMers, Cornejo Villavicencio explores the lives of the undocumented—and the mysteries of her own life. She finds the singular, effervescent characters across the nation often reduced in the media to political pawns or nameless laborers. The stories she tells are not deferential or naively inspirational but show the love, magic, heartbreak, insanity, and vulgarity that infuse the day-to-day lives of her subjects.

In New York, we meet the undocumented workers who were recruited into the federally funded Ground Zero cleanup after 9/11. In Miami, we enter the ubiquitous botanicas, which offer medicinal herbs and potions to those whose status blocks them from any other healthcare options. In Flint, Michigan, we learn of demands for state ID in order to receive life-saving clean water. In Connecticut, Cornejo Villavicencio, childless by choice, finds family in two teenage girls whose father is in sanctuary. And through it all we see the author grappling with the biggest questions of love, duty, family, and survival.

In her incandescent, relentlessly probing voice, Karla Cornejo Villavicencio combines sensitive reporting and powerful personal narratives to bring to light remarkable stories of resilience, madness, and death. Through these stories we come to understand what it truly means to be a stray. An expendable. A hero. An American.

Karla Cornejo Villavicencio has written about immigration, music, beauty, and mental illness for The New York Times, The Atlantic, The New Republic, Glamour, Elle, Vogue, n+1, and The New Inquiry, among others. She lives in New Haven with her partner and their dog.

“A scream and a song . . . a complex, human look at the fabric of this nation.”—Quiara Alegría Hudes

“In her captivating and evocative first book, The Undocumented Americans, [Karla] Cornejo Villavicencio aims to tell ‘the full story’ of what it means to be undocumented in America, in all of its fraughtness and complexity, challenging the usual good and evil categories through a series of memoir-infused reported essays. In doing so, she reveals how her subjects, including her own family members, struggle with vices like adultery and self-harm, even while doing backbreaking, demeaning work to support their families. . . . Cornejo Villavicencio reveals a fullness of character that feels subversive, simply because of how rare it is.”—The New York Times Book Review

“There’s nothing to do but sit down and read this book. Inside it, I feel deep in being, immersed in a frankness and a swerving bright and revelatory funkiness I have not encountered ever before concerning the collective daily life of an undocumented family in America. It is a radical human story and Karla Cornejo Villavicencio is a great writer.”—Eileen Myles

“This valuable and authentic inquiry is powerfully embellished with magical imaginings, as when she envisions a man drowning during Hurricane Sandy’s last moments. Cornejo Villavicencio’s unfiltered and vulnerable voice incorporates both explosive profanity and elegiac incantations of despair, as, for example, when she internalizes the hatred toward brown people manifest in the poisoning of Flint, Michigan’s water supply. She gives of herself unstintingly as she speaks with undocumented day laborers, older people working long past retirement age, and a housekeeper who relies on the botanica and voodoo for health care. Cornejo Villavicencio’s challenging and moving testimonio belongs in all collections.”—Booklist (starred review)

“Memorable . . . compelling . . . heartwrenching . . . a welcome addition to the literature on immigration told by an author who understands the issue like few others.”—Kirkus Reviews