The Grand Affair: John Singer Sargent in His World (Hardcover) 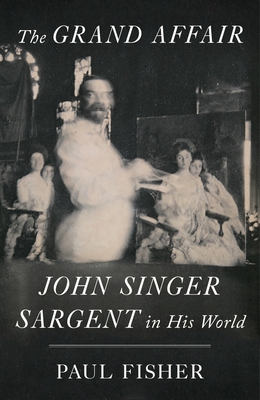 A bold new biography of the legendary painter John Singer Sargent, stressing the unruly emotions and furtive desires that drove his innovative work and defined the transatlantic, fin de siècle culture he inhabited.

A great American artist, John Singer Sargent is also an abiding enigma. While dressing like a businessman and crafting a highly respectable persona, he scandalized viewers on both sides of the Atlantic with the frankness and sensuality of his work. He charmed the nouveaux riches as well as the old money, but he reserved his greatest sympathies for Bedouins, Spanish dancers, and the gondoliers of Venice. At the height of his renown in Britain and America, he quit his lucrative portrait-painting career to concentrate on allegorical murals with religious themes—and on nude drawings of male models that he kept to himself.

In The Grand Affair, the historian Paul Fisher offers a vivid life of the buttoned-up artist and his unbuttoned work. Sargent’s nervy, edgy portraits exposed illicit or dark feelings in himself and his sitters—feelings that high society on both sides of the Atlantic found fascinating and off-putting. Fisher traces Singer’s life from his wandering trans-European childhood to the salons of Paris, and the scandals and enthusiasms he caused, and on to London. There he mixed with eccentrics and aristocrats, and the likes of Henry James and Oscar Wilde, while at the same time forming a close relationship with a lightweight boxer who became his model, valet, and traveling partner. In later years, Sargent met up with his friend and patron Isabella Stewart Gardner around the world and devoted himself to a new model, the African American elevator operator and part-time contortionist Thomas McKeller, who would become the subject of some of Sargent’s most daring and powerful work.

Illuminating Sargent’s restless itinerary, Fisher explores the enigmas of fin de siècle sexuality and art, fashioning a biography that grants the man and his paintings new and intense life.

Paul Fisher is a professor of American studies at Wellesley College and the author of House of Wits: An Intimate Portrait of the James Family and Artful Itineraries: European Art and American Careers in High Culture, 1865–1920. He helped organize the Isabella Stewart Gardner Museum’s pathbreaking 2020 exhibit Boston’s Apollo: Thomas McKeller and John Singer Sargent and contributed to the exhibition catalog, which won the 2020 George Wittenborn Memorial Book Award for an outstanding publication in the visual arts and architecture.

"A comprehensive and engaging biography of the artist . . . A precise and erudite writer with a strong, authoritative voice, Fisher combines biography, history, and art criticism to give readers an immersive vision of Sargent’s extraordinary life and times . . . [His] ability to get to the heart of Sargent’s genius makes The Grand Affair a truly defining work, and one worth revisiting in order to relish every last detail." —Michael Patrick Brady, WBUR

"[A] sensitive biography . . . Fisher wisely avoids making sweeping claims about Sargent’s sexuality, choosing instead to examine how 'the protected and sanctioned camaraderie of the studio' enabled the painter’s art and social life to take on quietly unconventional forms." —The New Yorker

"[The Grand affair] begins from a new perspective, investigating every nook and cranny of Sargent’s peripatetic life, looking for tangible clues to Sargent the man . . . Intriguing . . . Fisher indisputably gives us much to reflect on regarding the artist’s travels, his social and studio circles, his close friends, and the hitherto largely hidden gay enclaves of the Belle Époque." —Sue Roe, The Wall Street Journal

"[Fisher] writes perceptive appreciations of such famous paintings as Portrait of Madame X . . . These passages and many more forcefully remind us of the sheer beauty of Sargent’s work . . . Fisher has worked hard to integrate [Sargent's] two halves into a coherent portrait of a complicated man . . . Valuable." —Wendy Smith, The Boston Globe

"[An] absorbing new biography . . . A very lively and illuminating reassessment of one of the greatest painters of his time." —Peter Parker, The Spectator

"A vibrant, authoritative biography . . . Sargent’s 'social and aesthetic relevance—both to his time and ours,' Fisher argues convincingly, derives from 'his representation of an ever-more-complex modernity and an ever-more-diverse and multicultural world.' A sensitive, nuanced portrait." —Kirkus Reviews (starred review)

“In this masterful biography, Paul Fisher reveals the rich and shadowy truths at the heart of John Singer Sargent’s life, while also offering a stunning reassessment of the famous painter’s work. Sargent, we learn, was far more than a polished society artist—he was a bold seeker who was impatient with rules and struggled to free himself from the constraints of his world, from racism to restrictive gender roles. A thrill to read, The Grand Affair is entirely absorbing—suspenseful, witty, poignant, and gripping.” —Charlotte Gordon, author of Romantic Outlaws, winner of the National Book Critics Circle award in biography, and distinguished professor of English at Endicott College

"Already an adept biographer, Paul Fisher has found his subject in John Singer Sargent, just as the fortunate Sargent has acquired his ablest chronicler to date. Replete with fresh critical assessments, The Grand Affair treats readers not only to a total immersion in the cosmopolitan swirl of Sargent’s circles of aesthetic and social affinity, but also to the rare enchantment that takes hold in the best biographies, when writer and subject are perfectly matched." —Megan Marshall, Pulitzer Prize–winning author of Margaret Fuller: A New American Life and Elizabeth Bishop: A Miracle for Breakfast

"The Grand Affair is enthralling. Sweeping in scope and startling in detail, it is a dazzling recreation and reevaluation of Sargent’s life and artistic vision. This book brilliantly displays and interrogates the underlying homoeroticism not only of Sargent's work, but of late 19th and early 20th century art. This is the in-depth study of Sargent—and his world—for which art historians and scholars of gender and sexuality have been waiting." —Michael Bronski, professor at Harvard University and author of A Queer History of the United States

"John Singer Sargent has long been seen as a 'society artist,' a sumptuously gifted painter who flattered the rich and famous, and was out of step, stylistically and temperamentally, with the edgier art of the Impressionists and their followers. In The Grand Affair, Paul Fisher blows these prejudices to pieces. Sargent was every bit as adventurous as his most advanced contemporaries, Fisher argues, though in ways that have been, for various reasons (some prudish, some academic), obscured for over a century. He gives us an intimate tour inside the ambiguous world of Sargent’s studio, with its exotic costumes and elaborate, gender-bending roleplay. Seemingly indifferent to the erotic charms of women, Sargent painted his female models, his 'divas,' with a marvelous sense of eruptive power. Fisher argues, convincingly, that these portraits, like the drop-dead fabulous Madame X, were in fact self-portraits of a sort—'transgressive and independent in a way that he couldn’t be himself.' Fisher seamlessly weaves together biography, social history, art history, aesthetic theory, and gossip. This is a dazzling book." —Christopher Benfey, author of Degas in New Orleans.

"The Grand Affair is a splendidly readable, fast-paced biography replete with fascinating details. This book is both an insightful psychological study and a vivid panorama of the many places Sargent called home." —Christina Thompson, author of Sea People: The Puzzle of Polynesia and editor of the Harvard Review