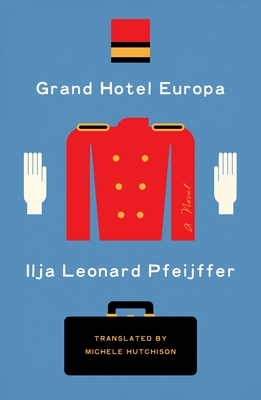 Longlisted for the 2023 DUBLIN Literary Award

A sweeping, atmospheric novel about European identity, centered on a hotel that encapsulates the continent's manifold contradictions.

The love of my life lives in my past. Despite the alliteration it’s a terrible line to have to write. I don’t want to come to the conclusion, just as the hotel I’m staying in and the continent it is named after, that the best times are behind me and that I’ve little more to expect of the future than living off my past.

A writer takes up residence in the stately but decaying Grand Hotel Europa in order to contemplate where things went wrong with Clio—an art historian and the love of his life. His recollections take him back to when they first met in Genoa, his wanton visits to her in Venice, and their dulcet trips to Malta, Palmaria, Portovenere, and the Cinque Terre in their thrilling search for the last painting made by Caravaggio. Meanwhile, he becomes fascinated by the mysteries of the Grand Hotel Europa and the memorably eccentric characters who inhabit it, all of whom seem to hail from a halcyon era. All the while, globalization is laying claim to even this place, where a sense of lost glory hangs sulkily in the air.

Grand Hotel Europa is Ilja Leonard Pfeijffer’s masterly novel of the old continent, where there's so much history that there hardly seems space left for a future. Cinematic, lyrical, and brimming with humor, this is a novel about the European condition, which like the staff and residents of the Grand Hotel Europa may have already seen its best days.

Ilja Leonard Pfeijffer is an award-winning Dutch poet and writer. He has more than forty titles to his name, including poetry, novels, short stories, plays, and essays. His novel La Superba (2013) won the Libris Literature Prize, a prestigious prize awarded every five years by the Royal Academy of Belgium. The book was a bestseller and has been published in several countries, including the United States, Germany and Italy. Pjeijffer studied classics at Leiden University, where he earned his PhD in 1996 and worked as a researcher and teacher of Ancient Greek until 2004. In 2008, he moved to the northern Italian port city of Genoa, where he has lived and worked ever since.

Michele Hutchison is a literary translator from Dutch and French into English. In 2020, she won the Vondel Translation Prize for her translation of Stage Four by Sander Kollaard and the International Booker Prize, together with the author Marieke Lucas Rijneveld, for The Discomfort of Evening. She is also the coauthor of The Happiest Kids in the World: What We Can Learn from Dutch Parents.

"One can’t help being impressed by how many narrative balls Pfeijffer keeps in the air. The novel combines a comedy of manners with travel journalism, political and cultural commentary, and reflections on European identity. Oh, plus an art-heist mystery (centering on the final days and paintings of Caravaggio)." —Rand Richards Cooper, The New York Times Book Review

"Lively and entertaining . . . Grand Hotel Europa is a fine take on (one big part of) the contemporary European condition, as well as on tourism and the question of authenticity (with considerable overlap across all of these). It's a big, fun read." —M. A. Orthofer, The Complete Review

“Pfeijffer’s language, as a rule, is remarkable . . . A master of creating tension, suspense, and intrigue through strange situations and well-drawn characters, Pfeijffer . . . continues to ensnare the reader in his labyrinthine novel while his character loses himself in the contradictions of Genoan society. The author wants to leave the reader wanting more, and he does.” —Alina Cohen, Los Angeles Review of Books

“If Italo Calvino decided to make one of his invisible cities visible, the result might look something like Pfeijffer’s Genoa: rooted in the real world of Europe in the age of mass migration, but abstract and mythic enough that the legendary Genoese travelers—Columbus, the Ostrogoths—could still find their way through its labyrinthine streets.” —Benjamin Moser, Pulitzer Prize–winning author of Sontag: Her Life and Work

“Thoroughly compelling and lyrical . . . The stories related throughout La Superba are attention-grabbing and entertaining, sometimes surreal, and at times downright grotesque. But while flirting with the obscene, the novel’s rawness also manages to strike a sympathetic chord.” —Lindsay Semel , Asymptote