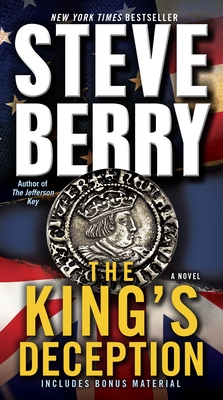 This is book number 8 in the Cotton Malone series.

Cotton Malone and his fifteen-year-old son, Gary, are headed to Europe. As a favor to his former boss at the Justice Department, Malone agrees to escort a teenage fugitive back to England. But after he is greeted at gunpoint in London, both the fugitive and Gary disappear, and Malone learns that he’s stumbled into a high-stakes diplomatic showdown—an international incident fueled by geopolitical gamesmanship and shocking Tudor secrets.

At its heart is the Libyan terrorist convicted of bombing Pan Am Flight 103, who is set to be released by Scottish authorities for “humanitarian reasons.” An outraged American government objects, but nothing can persuade the British to intervene.

Run by the CIA, the operation aims to solve a centuries-old mystery, one that could rock Great Britain to its royal foundations.

Blake Antrim, the CIA operative in charge of King’s Deception, is hunting for the spark that could rekindle a most dangerous fire, the one thing that every Irish national has sought for generations: a legal reason why the English must leave Northern Ireland. The answer is a long-buried secret that calls into question the legitimacy of the entire forty-five-year reign of Elizabeth I, the last Tudor monarch, who completed the conquest of Ireland and seized much of its land. But Antrim also has a more personal agenda, a twisted game of revenge in which Gary is a pawn. With assassins, traitors, spies, and dangerous disciples of a secret society closing in, Malone is caught in a lethal bind. To save Gary he must play one treacherous player against another—and only by uncovering the incredible truth can he hope to prevent the shattering consequences of the King’s Deception.

Don’t miss Steve Berry’s novella The Tudor Plot and an excerpt from The Lincoln Myth in the back of the book.

Praise for The King’s Deception

“Forget Clancy and Cussler. When it comes to this genre, there is simply no one better.”—The Providence Journal

Praise for The King’s Deception

“[A] perfect blend of history and adventure . . . The history enhances the main narrative and gives it an added punch. . . . Pick up this new fast-paced book by Berry and have an excellent thrill ride while you also get a wonderfully enjoyable history lesson. Education has never been this much fun.”—The Huffington Post

“Steve Berry does what Dan Brown thought he did. [He combines] a love of history with global thriller action and creates books that are impossible to put down and even educational. . . . A perfect blend of history and action . . . perfect summer reading.”—Crimespree Magazine

“Cotton Malone returns in a thriller that combines history and gunfire. . . . Readers old and new will enjoy The King’s Deception.”—Associated Press

“A complex, rollicking forty-hour ride through a very dangerous and wild weekend in London where the betrayals collide with current events and the deceptions of hundreds of years ago, resulting in an explosive finish that no one who reads it will forget. . . . Berry is a wonderful guide as always, interweaving fascinating bits of history into the narrative. . . . I can’t give you a better endorsement for a book or an author.”—Bookreporter

“There are more twists and turns in this plot than in a 1970s disco bar. Interspersed between the modern incidents of betrayals and counter-betrayals are numerous episodes of Tudor/Elizabethan history sure to ruffle the skirts of the most avid Tudor fan. With its great plot and interesting characters, this book is a real page-turner and an enjoyable read. Highly recommended.”—Historical Novels Review

“Action interspersed with unbelievable shockers from the past . . . [Cotton Malone] continues to do battle with history and those who would kill to keep its secrets buried.”—Library Journal

“All the elements of a Da Vinci Code adventure are in place [including] undeniably fascinating historical material.”—Publishers Weekly

“Contemporary politics mixes with treachery from Tudor England for a novel filled with suspense. The detailed history of Tudor England will entrance fans of British historicals. The castles mentioned are real and worth a visit. There are assassins, traitors, spies and mystery surrounding Cotton and his son, Gary.”—British Weekly