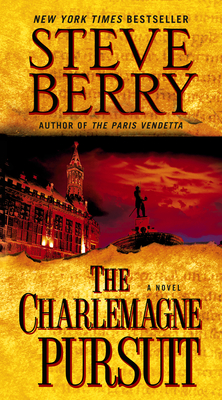 This is book number 4 in the Cotton Malone series.

“I could not put down Berry's story of a nuclear submarine accident and a Nazi plot. This was one of the most intelligent novels I have read this year. Steve Berry is in a league that very few writers share.”
— George Scott, Eagle Eye Book Shop, Decatur, GA

NEW YORK TIMES BESETSELLER • “Those who relish suspense in the Da Vinci Code vein will snap this one up, the best yet in the series.”—Publishers Weekly (starred review)

As a child, former Justice Department agent Cotton Malone was told that his father died in a submarine disaster in the North Atlantic. But what he now learns stuns him: His father’s sub was a secret nuclear vessel lost on a highly classified mission beneath the ice shelves of Antarctica.

Twin sisters Dorothea Lindauer and Christl Falk are also determined to find out what became of their father, who died on the same submarine–and they know something Malone doesn’t: Inspired by strange clues discovered in Charlemagne’s tomb, the Nazis explored Antarctica before the Americans. Now Malone discovers that cryptic journals penned in “the language of heaven,” conundrums posed by an ancient historian, and his father’s ill-fated voyage are all tied to a revelation of immense consequence for humankind. As Malone embarks on a dangerous quest with the sisters, he will finally confront the shocking truth of his father’ s death and the distinct possibility of his own.

“[Steve] Berry outdoes himself… [in his] best book to date.”—Library Journal, starred review

“Those who relish suspense in the Da Vinci Code vein will snap this one up, the best yet in the series.”—Publishers Weekly,starred review