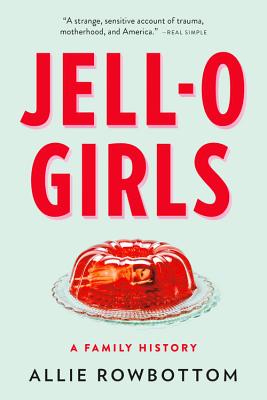 By Allie Rowbottom
$17.99
On Our Shelves Now

An incredible book. It was nothing like I expected but phenomenal regardless. As you follow Jello through the years, the book takes a look at women's roles and what is expected of them. It's a history book and a feminine telling of how America was created by women and against women in the 1900's. Great for book club.

“Allie Rowbottom’s account of the first century of JELL-O brand gelatin’s history hits all the sweet spots of nonfiction for me, as it weaves between her personal family history; the local impact on the residents of Le Roy, New York; and the marketing permutations ‘America’s favorite dessert’ has undergone to reflect cultural changes. Like a metaphorical marshmallow-and-carrot molded dessert, JELL-O Girls contains reflections on class and gender while questioning the toxicity of the reputed family curse.”
— Maryelizabeth Yturralde, Mysterious Galaxy Books, San Diego, CA

A "gorgeous" (New York Times) memoir that braids the evolution of one of America's most iconic branding campaigns with the stirring tales of the women who lived behind its facade - told by the inheritor of their stories.

In 1899, Allie Rowbottom's great-great-great-uncle bought the patent to Jell-O from its inventor for $450. The sale would turn out to be one of the most profitable business deals in American history, and the generations that followed enjoyed immense privilege - but they were also haunted by suicides, cancer, alcoholism, and mysterious ailments.

More than 100 years after that deal was struck, Allie's mother Mary was diagnosed with the same incurable cancer, a disease that had also claimed her own mother's life. Determined to combat what she had come to consider the "Jell-O curse" and her looming mortality, Mary began obsessively researching her family's past, determined to understand the origins of her illness and the impact on her life of Jell-O and the traditional American values the company championed. Before she died in 2015, Mary began to send Allie boxes of her research and notes, in the hope that her daughter might write what she could not. Jell-O Girls is the liberation of that story.

A gripping examination of the dark side of an iconic American product and a moving portrait of the women who lived in the shadow of its fractured fortune, Jell-O Girls is a family history, a feminist history, and a story of motherhood, love and loss. In crystalline prose Rowbottom considers the roots of trauma not only in her own family, but in the American psyche as well, ultimately weaving a story that is deeply personal, as well as deeply connected to the collective female experience.

Allie Rowbottom received her BA from New York University, her MFA from the California Institute of the Arts, and her PhD in Creative Writing and Literature from the University of Houston. Her work has received scholarships, essay prizes and honorable mentions from Tin House, Inprint, the Best American Essays series, the Florida Review, The Bellingham Review, the Black Warrior Review, The Southampton Review, and Hunger Mountain. She lives in Los Angeles.

"Rowbottom weaves together her family history and the story of the classic American dessert to produce a book that alternately surprises and mesmerizes. Despite its title, this isn't a bland tale that goes down easy; Jell-O Girls is dark and astringent, a cutting rebuke to its delicate, candy-colored namesake.... Rowbottom has the literary skills and the analytical cunning to pull it off. Like a novelist, she can imagine herself into the emotional lives of others, while connecting her story and theirs to a larger narrative of cultural upheaval.... The writing is lush yet alert to specific.... But then Rowbottom's book is too rich and too singular to reduce to a tidy argument.... Gorgeous."
—Jennifer Szalai, New York Times

"We all come from somewhere, yet I never imagined that someone could come from Jell-O. From these beginnings, Allie Rowbottom has molded this generous book of intuition, connection, and grace. This is a work of wild insights and deep music."
—Nick Flynn, author of Another Bullshit Night in Suck City

"The author's family's Jell-O empire brought wealth and privilege but also seemed to curse the lives of her grandmother, her mother and herself. With this fascinating cultural history of an iconic dessert and its creators, Rowbottom has found the courage to break the mold."—People


"Watch it glimmer, see it shimmer, cool and fruity, Jell-O.... If you're an American of a certain age, that jingle will come to mind unbidden as you open Allie Rowbottom's devastating memoir.... Her book doubles as a social history of the influential brand and its patriarchal messaging.... The mother-daughter portrait that emerges here melts the heart."—O, the Oprah Magazine


"Allie Rowbottom's memoir is an unflinching exploration of the inheritance and curse behind an American icon. Graceful and genuine, Jell-O Girls is what happens when a damn good story meets an even better writer."—Mat Johnson, author of Pym and Loving Day

"To most Americans, Jell-O is a diner staple; the savior of the sickroom; the sweet "glue" for the fruit mold grandma serves at Thanksgiving. But Jell-O was a darker thing for Allie Rowbottom's family. Although her great-great-great uncle's purchase of the Jell-O patent secured the family fortune, it also molded its female members in ways that insidiously defined and confined. In this first-ever insider account Rowbottom mixes up equal parts history, sociology, feminist tract and personal mother-daughter story to create a literary treatise as clear and bright as Jell-O itself."—Carolyn Wyman, author of Jell-O: A Biography


"Allie Rowbotton is a talent not to be overlooked! I love this book with all my heart. I couldn't put down this strangely sparkling cultural and family history"


"Jell-O Girls is an artfully crafted feminist excavation of an American legacy and its dark underbelly by a tender and perceptive memoirist, a keen cultural critic, and a deserving chronicler of her mother's legacy. Jewel-toned as its subject, Rowbottom's prose brings into crystal focus the lacerating toll of patriarchy in our media, our homes, and our own bodies. She is a talent to be heralded."—Sarah Gerard, author of Sunshine State and Binary Star

"Rowbottom's keening book is at its core an act of devotion to her mother.... Rowbottom shares her mother's trenchant view of Jell-O's subliminal social programming, and her passages about the brand's marketing offer stimulating feminist cultural analysis. What gives her text its emotional force is the interweaving of this material with her own personal stories and those of her mother.... A moving portrait of abiding mother-daughter love."—Boston Globe


"Intimate and intriguing.... A fascinating feminist history of both a company and a family."—Publishers Weekly


"Brilliantly written and beautiful, Jell-O Girls is both a feminist document and an act of love. In compiling a history of the spell the Jell-O brand cast on the American housewife-by working its way into every dietary fad from "domestic science" to Weight Watchers-Allie Rowbottom also manages to chart the mystery of female pain. Along the way, Rowbottom reclaims her own family history, writing a tribute to her mother that is both gutting and gorgeous."—Alice Bolin, author of Dead Girls

"Rowbottom paints a fascinating portrait of the family behind one of America's most famous desserts.... This account illuminates both the rise of an American product and dynasty. The renown of Jell-O will attract a variety of readers to this memoir, and the storytelling will keep them turning pages to the very end."—Library Journal (starred review)


"This is more than a book: it's a phenomenon. It kept me up nights with its urgency and insistence, following Rowbottom, in her masterfully clear-eyed grief, on the hunt for understanding and explanation. JELL-O GIRLS is a heart-wrenching confession, an exacting cultural history and an important and honest feminist story for right now."—Aja Gabel, author of The Ensemble

"Rowbottom delivers a moving memoir of a daughter seeking to understand her mother, family, and the place of women in American society, and the narrative also serves as a thoughtful, up-close-and-personal feminist critique of a cultural icon. A book brimming with intelligence and compassion."
—Kirkus

"Allie Rowbottom's JELL-O GIRLS is a gripping and compelling portrait of the women born into one of America's most recognizable brands. With masterful storytelling, Rowbottom weaves together her story and her mother's, both coming of age as ambitious women in the shadow of an American icon. JELL-O GIRLS is a feminist revelation and a captivating investigation of the true history behind a family and the collective consciousness of a nation."
—Julia Fierro, author of The Gypsy Moth Summer

"Mysterious illnesses, great disappointments, haunting events-the story behind Jell-O (yes, that Jell-O) is crazy. The author picks up the narrative from her mother, who became obsessed with researching, documenting, and overturning what she believed was a family curse, before she passed away in 2015. Jell-O Girls is part family history, part American history, and part commentary on our patriarchal society. But unexpectedly and at its core, it's a story of motherhood."—Goop

"This surprising page-turner of a memoir tells the story of the drama-haunted family behind the wiggly dessert that went on to become one of the most profitable businesses in American history (and a favorite Southern ingredient)."
—Garden & Gun