Every Vow You Break: A Novel (Large Print / Paperback) 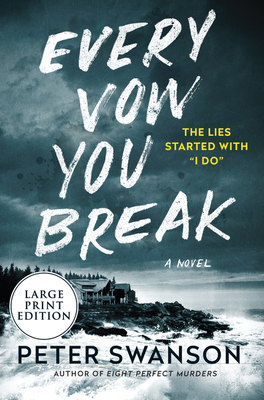 “I was hooked on Peter Swanson with Eight Perfect Murders, but he is now one of my favorite authors with Every Vow You Break. This book was brilliant! I was enthralled from the beginning and could not put this book down to save my life. The twists and turns were not expected, and I was very happy with the ending. Bravo!”
— Patty Reed, Ferguson Books & More, Grand Forks, ND

“Hitchcockian chills and thrills abound in Swanson's latest mystery, a twisty tale of survival and deception. " – O, the Oprah Magazine

A bride’s dream honeymoon becomes a nightmare when a man with whom she’s had a regrettable one-night stand shows up in this electrifying psychological thriller from the acclaimed author of Eight Perfect Murders.

Abigail Baskin never thought she would fall in love with a millionaire. Then she met Bruce Lamb. He’s a good guy, stable, level-headed, kind—a refreshing change from her previous relationships.

But right before the wedding, Abigail has a drunken one-night stand on her bachelorette weekend. She puts the incident—and the sexy guy who wouldn’t give her his real name—out of her mind, and now believes she wants to be with Bruce for the rest of her life. Their honeymoon on a luxurious, secluded island will be the beginning of their blissful lives together.

Then the mysterious stranger suddenly appears—and Abigail’s future life and happiness are turned upside down. He insists that their passionate night was the beginning of something much, much more. Something special. Something real—and he’s tracked her down to prove it.

Does she tell Bruce and ruin their idyllic honeymoon—and possibly their marriage? Or should she handle this psychopathic stalker on her own? To make the situation worse, strange things begin to happen. She sees a terrified woman in the shadows one night, and no one at the resort seems to believe anything is amiss… including her perfect new husband.

“Swanson specializes in writing mesmerizing thrillers that subvert readers’ expectations. The author works his particular magic once again with Every Vow You Break… Swanson’s shape-shifting saga is reminiscent, by turns, of such foreboding films as Vertigo [and] Fatal Attraction.”
— Wall Street Journal

“Just when we think we have an idea of what Abigail is up against, Swanson pulls the rug away from under us. Strange events give way to sinister revelations... The last act cranks up tension to the breaking point. Sit back, suspend all disbelief, and watch those pages fly by."
— Minneapolis Star Tribune

“Will give you major Fatal Attraction vibes…. A tantalizing plot, steamy scenes, and passionate relationships…”
— PopSugar

“If you love… curling up with an atmospheric murder mystery—or binging a Hitchcock marathon on TMC—Every Vow You Break delivers on all counts. But as did the master filmmaker, Swanson imbeds unpleasant truths about marriage and money, and whether or not we can truly know another person. Do all our relationships follow the same patterns, again and again? Are we merely bit players in someone else’s drama? Perhaps those are unsolvable mysteries.”
— Oprah Daily

“Hitchcockian chills and thrills abound in Swanson's latest mystery, a twisty tale of survival and deception. "
— O, the Oprah Magazine

“Lots of thriller writers know how to set a hook, but Swanson isn't satisfied with just one; the further we go into his devilishly twisty tales, the more hooks he sets… This time we start out on what seems like familiar ground: then-bride-to-be Abigail had a booze-fueled one-night stand… and is now being stalked by the man with whom she dallied. Fatal Attraction, right? Well, maybe, but we quickly see there's more to it than that.”
— Booklist

”If you’re looking for the suspense techniques of Alfred Hitchcock translated to the page, Swanson’s your man… References to Hitchcock’s Vertigo give an index to the murderous fun here.”
— Financial Times

"The author peels away layers of treachery leaving the reader, and unwitting newlywed Abigail, unsure of who to trust. Swanson taps into a survival instinct particularly resonant with the female experience, and makes Every Vow You Break glamorous, dark and terrifying."
— Independent (UK)

"Should come with a warning to prepare for a single-sitting, reading marathon as Swanson plunges us head-first into an addictive and deftly executed mystery which positively crackles with menace and suspense."
— Lancashire Evening Post

"You'll struggle not to read Every Vow You Break in one sitting. Peter Swanson's subtle hints that all is not what it seems build to a thrilling and gripping crescendo... glamorous, dark and terrifying."
— Irish News

"Another top-notch thriller from Swanson. I picked this up intending to take a quick look and was still pinned to my sofa two hours later . . . An addictive thriller that rather proves the adage: marry for money and you'll earn every penny."
— Alice O'Keeffe, The Bookseller, editor's pick

“Incredibly difficult to put down, Peter Swanson’s newest thriller, Every Vow You Break, is full of twists and surprises, but also constantly conveys that pit-of-your-stomach dread that suspense lovers are addicted to.”
— The Nerd Daily

“An unabashed page-turner that I dare you not to read all in one go.”
— Air Mail

“The plot twists come at a furious pace. When Abigail seeks help in dealing with Scott, she gradually discovers that she has no one she can count on. Almost no one around her is who they pretend to be.”
— Associated Press

“If you’re familiar with Peter Swanson’s super creepy previous novel, Eight Perfect Murders, you’ll understand that the new book is neither simple nor merely a matter of stalking… This one takes more perverse plot turns than Eight Perfect Murders even contemplated. For creepiness, this is the real goods.”
— Toronto Star

“Luckily for readers, [Swanson] keeps the story grounded by making Abigail an average person who refuses to be a victim. It's this simplicity that makes the character appealing and her triumphs magnificent.”
— Shelf Awareness

“Every Vow You Break takes the typical domestic thriller and puts a new spin on it — one that’s darker and more twisted than readers will suspect. However, that will just increase your desire to figure out what’s really going on… It’s sure to keep you on edge.”
— Culturess

“Swanson puts his own unique spin on the idea of marital bliss taking a dark and sinister turn in his newest release, which focuses not on a wedding itself, but on what comes after… [The novel] begs to be read in a couple of sittings...”
— Crime By the Book

“Swanson’s new novel is a good match with Lucy Foley’s psychological wedding thriller, The Guest List. Readers will bask in the creepiness of being stranded on a remote island, considering how far some might go to punish those who break sacred promises.”
— Library Journal

“The further we go into [Swanson’s] devilishly twisty tales, the more hooks he sets… Bride-to-be Abigail had a booze-fueled one-night stand… and is now being stalked by the man with whom she dallied. Fatal Attraction, right? Well, maybe, but we quickly see there's more to it than that.”

“Peter Swanson delivers another stellar thriller full of adrenaline inducing surprises and a plot that turns on a dime.”
— BookBub