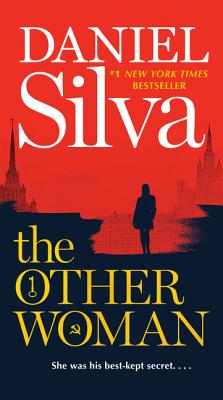 “The Other Woman is one of summer’s biggest titles.... It’s not hard to see why: This story of love and betrayal… is hard to put down.” — Entertainment Weekly

“Another jewel in the bedazzling crown of a spy-fiction master....There is an even more elaborately detailed backstory than usual, and it is every bit as compelling as the tension-drenched drama slowly unspooling in the present and leading to a socko finale.” — Booklist, starred review

“Excellent….Readers will be enthralled by both the history and the up-to-the-minute plot that Silva spins with such finesse.” — Publishers Weekly, starred review

“Perhaps his most enthralling novel to date. Twists, turns, and nonstop action fill every page.... An instant classic from Daniel Silva, whose latest masterpiece puts him firmly alongside le Carré and Forsyth as one of the greatest spy novelists of all time.” — The Real Book Spy

“If someone were to ever commission the building of a Mount Rushmore for thriller writers, Daniel Silva’s face would surely be featured on it… The Other Woman is an instant classic from Daniel Silva, who continues building his legacy as one of the greatest spy novelists the genre has ever known.”
— CrimeReads

“Silva has a knack for topically relevant novels, and The Other Woman is no exception.” — New York Post’s 25 Best Thrillers of the Summer

Praise for House of Spies:  “A tense, thrilling adventure.... With Silva’s novels you find yourself being educated as well as being entertained.... Silva is that rarity of rarities, a writer whose stories just keep getting better.” — Huffington Post

“An irresistible thriller…. The phrase ‘#1 New York Times best-selling author’ gets bandied about a lot (Which list? For how long?), but in Silva’s case, it means exactly what it says.” — Booklist, starred review

“Silva’s success lies in his mix of authenticity and charm; his swings from global fears to domestic comforts.… There’s exotic scenery, insight into both history and current events, wit, romance, and a lot of heart.... It’s a recipe that keeps his readers coming back for more.” — Pittsburgh Post-Gazette

“Written by one of our greatest living spy novelists, House of Spies gives us protagonist Gabriel Allon in his 17th adventure. The novel features Silva’s taut and compelling dialogue and keen insight into the human psyche.” — Dallas Morning News