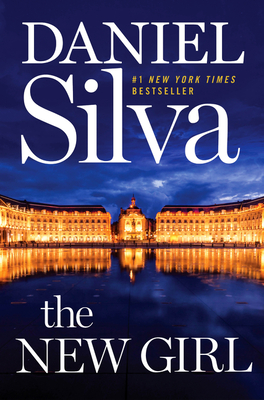 Now you see her.  Now you don’t.  THE NEW GIRL.  A thriller of deception, betrayal, and vengeance.

She was covered from head to toe in expensive wool and plaid, the sort of stuff one saw at the Burberry boutique in Harrods. She carried a leather bookbag rather than a nylon backpack. Her patent leather ballet slippers were glossy and bright. She was proper, the new girl, modest. But there was something else about her …

Gabriel Allon, the legendary chief of Israeli intelligence, has spent most of his life fighting terrorists, including the murderous jihadists financed by Saudi Arabia. Prince Khalid—or KBM, as he is known—has pledged to finally break the bond between the Kingdom and radical Islam. For that reason alone, Gabriel regards him as a valuable if flawed partner. Together they will become unlikely allies in a deadly secret war for control of the Middle East. The life of a child, and the throne of Saudi Arabia, hang in the balance. Both men have made their share of enemies. And both have everything to lose.

Filled with dark humor, breathtaking twists of plot, and an unforgettable cast of characters, The New Girl is both a thrilling, page-turning tale of entertainment and a sophisticated study of political alliances and great-power rivalries in a dangerous world. And it is once again proof that Gabriel Allon is “one of fiction’s greatest spies” (Kirkus) and Daniel Silva is “quite simply the best” (Kansas City Star) writer of foreign intrigue and suspense at work today.

“Fascinating.... An irresistible thriller, built on the realpolitik of today’s Middle East but deepened by the universality of human tragedy.” — Booklist

“Enjoyable as ever. Allon is a smart creation…. There is a pleasing yin and yang here, of destruction and (re)creation.” — Financial Times

“At times a brilliant novel tells us as much about the times we live in—and the struggles of the world, the global deceptions and tragedies—as well or better than journalism. Daniel Silva’s The New Girl is such a novel.  Eye-opening and a joy to read.”  — Bob Woodward

“One year after producing what might be the best spy novel since John le Carre’s The Spy who Came in from the Cold, Daniel Silva is back with another riveting, twisting tale of espionage that further cements his legacy as one of the greatest novelists the genre has ever known.... It’s hard to fathom that Silva could ever top himself after last year’s The Other Woman, but he’s done just that. “ — The Real Book Spy

“First-rate.... For the person who likes a great story of espionage and intrigue, Daniel Silva’s art restorer and master spy, Gabriel Allon, is a great match for Ian Fleming’s 007.” — The Daily News