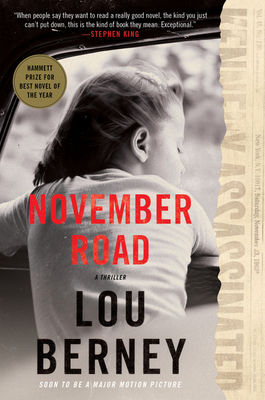 A gangster who knows too much about the Kennedy assassination realizes that he's about to be silenced, permanently. A woman takes her two daughters and flees her mundane husband and life. A chance encounter on the road brings them together, with life altering consequences for both. A great read with an ending
I did not expect!

The backdrop for this historical novel is the JFK assassination, a time when the world was torn apart. Two very different people have a chance meeting and so begins a thriller and love story. Themes of hope and redemption are witnessed throughout the book. The author, Lou Berney, describes his characters so well, the reader feels immediately drawn into the action! A great read!

This is a bit crime novel, a bit adventure story, a tale of redemption and a journey of hope and discovery all bottled up in FANTASTIC book. When a distraught mother of two takes to the road and collides with mobster Frank who knows too much about the JFK's assignation things really heat up.