The Lynching: The Epic Courtroom Battle That Brought Down the Klan (Hardcover) 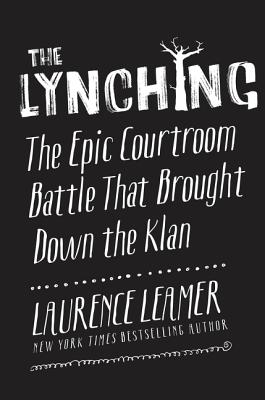 By Laurence Leamer
Email or call for price.
Hard to Find

It was a killing that hadn’t been seen in over 50 years—but showed the country that the Klan was still in large. It was a courtroom battle that brought down the largest hate-organization of white supremacy the nation has ever seen. A must read for any history reader.

The New York Times bestselling author of The Kennedy Women chronicles the powerful and spellbinding true story of a brutal race-based killing in 1981 and subsequent trials that undid one of the most pernicious organizations in American history—the Ku Klux Klan.

On a Friday night in March 1981 Henry Hays and James Knowles scoured the streets of Mobile in their car, hunting for a black man. The young men were members of Klavern 900 of the United Klans of America. They were seeking to retaliate after a largely black jury could not reach a verdict in a trial involving a black man accused of the murder of a white man. The two Klansmen found nineteen-year-old Michael Donald walking home alone. Hays and Knowles abducted him, beat him, cut his throat, and left his body hanging from a tree branch in a racially mixed residential neighborhood.

Arrested, charged, and convicted, Hays was sentenced to death—the first time in more than half a century that the state of Alabama sentenced a white man to death for killing a black man. On behalf of Michael’s grieving mother, Morris Dees, the legendary civil rights lawyer and cofounder of the Southern Poverty Law Center, filed a civil suit against the members of the local Klan unit involved and the UKA, the largest Klan organization. Charging them with conspiracy, Dees put the Klan on trial, resulting in a verdict that would level a deadly blow to its organization.

Based on numerous interviews and extensive archival research, The Lynching brings to life two dramatic trials, during which the Alabama Klan’s motives and philosophy were exposed for the evil they represent. In addition to telling a gripping and consequential story, Laurence Leamer chronicles the KKK and its activities in the second half the twentieth century, and illuminates its lingering effect on race relations in America today.

Laurence Leamer is the New York Times bestselling author of more than a dozen books, including The Kennedy Women and The Price of Justice. He has worked in a French factory and a West Virginia coal mine, and was a Peace Corps volunteer in Nepal. His play, Rose, was produced off Broadway last year. He lives in Palm Beach, Florida, and Washington, D.C., with his wife, Vesna Obradovic Leamer.

“America’s unaddressed history of lynching and racial violence has left this nation vulnerable to horrific hate crimes, none more devastating than what is documented in this compelling book. We ignore Laurence Leamer’s account at our peril.”
— Bryan Stevenson, author of the New York Times bestseller Just Mercy: A Story of Justice and Redemption

“Powerful... engrossing... and a pertinent reminder of the consequences of organized hatred.”
— Kirkus Reviews (starred review)

“Leamer infuses his tale with the drama of a popular novel.”
— Washington Post

“For decades, Morris Dees has fearlessly demolished White Supremacist hate groups with his legal cunning. Laurence Leamer does a wonderful job in The Lynching describing how Dees put the KKK out of business. This legal thriller is destined to become a major motion picture. Highly recommended.”
— Douglas Brinkley, author of The Great Deluge: Hurricane Katrina, New Orleans and the Mississippi Gulf Coast

“Leamer has deftly told the tragic story of the 1981 lynching of Michael Donald and the long campaign of civil rights activist Morris Dees to use unprecedented legal tactics to cripple the modern Ku Klux Klan. A narrative as powerful as any novelist could imagine.”
— Dan T. Carter, author of The Politics of Rage: George Wallace, the Origins of the New Conservatism and the Transformation of American Politics

“A deftly researched history of the civil rights movement. ... Today, the Klan still exists. The Lynching reminds us why that matters.”
— BookPage

“The Lynching reveals truths that few people know and everyone should. The extraordinary story of Morris Dees, a uniquely American hero, fighting for and winning vengeance and justice in the courts.”
— Arthur Bryant, Chairman, Public Justice

“Leamer brings... a sharp eye for tragedy... to his new book on the Michael Donald murder and its ramifications. ... Leamer does a truly remarkable job of humanizing Donald and his family, and of depicting the Mobile of the era.”
— Al.com

“It is endearing to read about those willing to fight injustice with more than just thoughts and prayers but with heroic action and personal risk. In these difficult times, it is an uplifting and inspiring story.”
— Bookreporter.com

“Urgent and necessary.”
— The Oklahoman

“Necessary reading. ... The Lynching, while of great cultural importance, reads like a courtroom drama. ... An important book.”
— Under the Radar

“Laurence Leamer writes with the skill of a born storyteller. ... [A] gripping book.”
— Finger Lakes Times