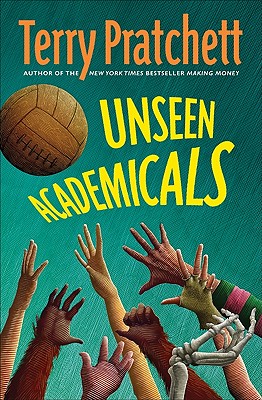 By Terry Pratchett
$25.99
Email or call for price.

This is book number 37 in the Discworld series.

Discworld lives on in Unseen Academicals, the latest novel from Terry Pratchett. Delivering the trademark insight and humor readers the world over have come to expect from “the purely funniest English writer since Wodehouse” (Washington Post Book World), Unseen Academicals focuses on the wizards at Ankh-Morpork’s Unseen University, who are reknowned for many things—sagacity, magic, and their love of teatime—as they attempt to conquer athletics.

“In short, this is as busy and as daft as any other Discworld yarn, which means it is the quintessence of daft. Nobody writes fantasy funnier than Pratchett.”
— Booklist

“At its heart, this is an intelligent, cheeky love letter to football, its fans and the unifying power of sports.
— Publishers Weekly

“This account of Unseen University’s entry into the world of soccer (or, as they occasionally call it, “foot-the-ball”) pushes past the usual conventions of satire to offer equal parts absurdist philosophy and heartwarming romance....A witty addition to the long-running fantasy series”
— Kirkus Reviews

“Thirty-seven books in and ... Discworld is still going strong...and doing so with undimmed, triumphant exuberance. ”
— The Guardian

“It’s a triumphant effort”
— The Independent on Sunday